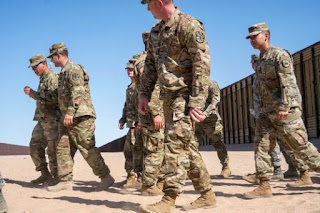 Administration officials said last week that they were considering a plan to send up to 1,000 active-duty troops to the border, but that deployment, dubbed Operation Faithful Patriot, will now surpass 5,200, said Gen. Terrence O’Shaughnessy, commander of U.S. Northern Command. He said the number of troops could rise depending on the demands placed on U.S. Customs and Border Protection agents manning the border.
"That is just the start of this operation," O’Shaughnessy said during a news conference at CBP headquarters in Washington on Monday. "Border security is national security."
The troops will not conduct law enforcement activities, but some will be armed as they provide support to Border Patrol agents along the border.
National Guard units have already been assisting by monitoring video surveillance feeds to direct Border Patrol agents manning the vast stretches between U.S. ports of entry. The new deployment of active-duty troops will include helicopter and other aviation units armed with night vision technology to help identify anyone trying to illegally cross the border, and to deploy CBP agents to apprehend them, O’Shaughnessy said.
“We will be able to spot and identify groups, and rapidly deploy,” he said.
The operation will also include engineering units to build temporary barriers, lay out concertina wire at ports of entry, and construct temporary housing for U.S. personnel, he said. About 800 troops are already en route to Texas from Fort Campbell and Fort Knox, and more will follow this week headed toward Arizona and California.
Typically, migrant caravans travel in numbers to seek safety and avoid risks such as kidnap, rape and extortion. When the last migrant caravan reached the U.S. border in April, a majority of people presented themselves at ports of entry to request asylum, a legal way to enter the United States.
A Homeland Security official, who spoke on condition of anonymity because plans were not yet finalized, said the president is expected to deliver a speech this week to outline further actions to halt the migrant caravan, which could include limiting, or halting, the ability of migrants to request asylum. That move would be predicated on national security arguments similar to those used to enact Trump’s travel ban last year on certain individuals from Muslim-dominated countries and would meet the same legal challenges by immigration advocacy and civil rights organizations.
White House spokeswoman Sarah Sanders declined on Monday to detail other aspects of the new border security plan, and would not confirm whether Trump will deliver a speech on the topic this week.
"There are a lot of options that are being discussed right now," she said.
Trump on Monday again claimed that the migrant caravan may have "many gang members" and "some very bad people." Reporters from USA TODAY and other media outlets, including The Associated Press, have not seen the presence of such individuals. Supporters of the caravan have denied such allegations. Many of the migrants are families traveling with children.
"Please go back, you will not be admitted into the United States unless you go through the legal process," he tweeted. "This is an invasion of our Country and our Military is waiting for you."
Source: usatoday.com