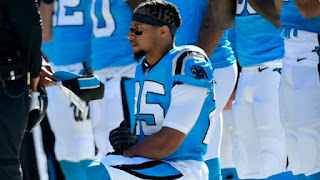 Reid offers details on why he called Jenkins a "sellout" after their pregame rift last week, citing a players-owners meeting from last year.


Panthers safety Eric Reid offered new details Sunday about what sparked his on-field rift with Eagles' safety Malcolm Jenkins last week.
After the Week 6 matchup, Reid called Jenkins a "sellout" and "neocolonialist."
This week, Reid spoke in depth about the November 2017 meeting, and deal, that led to his departure from the Players Coalition and his run-in with Jenkins.
"We were brought in under the premise that the NFL wanted to use their resources to help the black community," Reid said of the players-owners meeting. "We established within the first five minutes of that meeting that we weren’t there to negotiate an end to the protests. After about an hour and a half of talking, (Texans owner) Bob McNair said, 'I think the elephant in the room is this protesting.' (Bills owner) Terry Pegula follows up with, ‘Yeah, I already lost two sponsors to my hockey team. We need to put a Band-Aid on this and we need a black figure head to do it.’
"(Eagles owner) Jeffrey Lurie said, 'We can do more for the black community than you could ever imagine with our resources.' Bob McNair then said, ‘Yeah, just make sure you tell your comrades to stop that protesting business.’"
Reid went on to say that after the meeting the coalition reestablished they were not going to negotiate an end to the protests.
"The NFL said they wanted to use its resources to help the black community, so I was fine with giving my opinion on how they could do that," he said.
"That changed the last weekend of November when Malcolm called me on the phone and asked if the NFL made a donation to the Players Coalition, would that be enough for me to stop protesting? He said that they were willing to do $5 million and I told him, no, we’ve already established two times prior to this that we weren’t negotiating an end to a protest. He then asked me how much would it take. I ended that conversation."
At that point Reid and a number of other players, including former Dolphins safety Michael Thomas — who is now with the Giants — left the coalition.
“That weekend, Malcolm stopped protesting," Reid added. "He said it was time for everyone to stop protesting. He didn’t protest the rest of the year.
"The following May, the NFL and the players coalition finalized and announced their deal and within 24 hours of that, the NFL changed the policy on the national anthem requiring everyone to stand. So, those series of events are not a coincidence. The NFL used him to change the anthem policy to force an end to the protest to satisfy its sponsors, like Terry Pegula mentioned, and probably also to satisfy the President of the United States.
"We spent weeks on the phone talking about this deal, saying it wasn’t an end to the protests and he made the decision on his own to move forward and essentially allow the NFL to hide behind his black face, as Terry Pegula said, to make a change to the anthem policy to force us to stand."
Reid also gave details on the structure of the deal the coalition and the league reached saying it was set up “much like a player contract” and that it was “heavily incentivized."
See the full video here: https://t.co/NzFOKdx6QQ
Source: sportingnews.com